Now how in thunderations is one of them twins a unicorn and the other a pegasus? – Applejack

The Mane Six are all at the hospital, waiting to see the new foal born to the Cakes. However, Sugarcube Corner appears to have been having a two for one sale, since the foal turns out to be twins… and one is a unicorn and the other a Pegasus. Applejack wonders how that’s possible, but Pinkie is distracted by the prospect of having two new playmates. She also tries to celebrate their 0th birthday, to Nurse Pinkheart’s chagrin. Rarity and RD both mention that the babies may show bursts of unusually strong magic and wing power respectively.

Cut to a month later, and Pinkie is having great fun with her new little friends, and also learning a bit about babies, including the need to change, feed and burp them. She has little interest in those things, though, just wanting to play some more.

Suddenly, the Cakes remember a huge order from out of town that they had forgotten about. Strapped for time, they decide to find a baby-sitter, pronto. Pinkie volunteers, but they are reluctant to use her, not being sure she understands the difference between being a playmate and a caretaker. They ask each of the other Mane Six, but they all have good reasons why they can’t help… well, except Rarity, who just refuses, but is flattered that they considered her. With no other choice, they entrust the twins to Pinkie, and rush out. 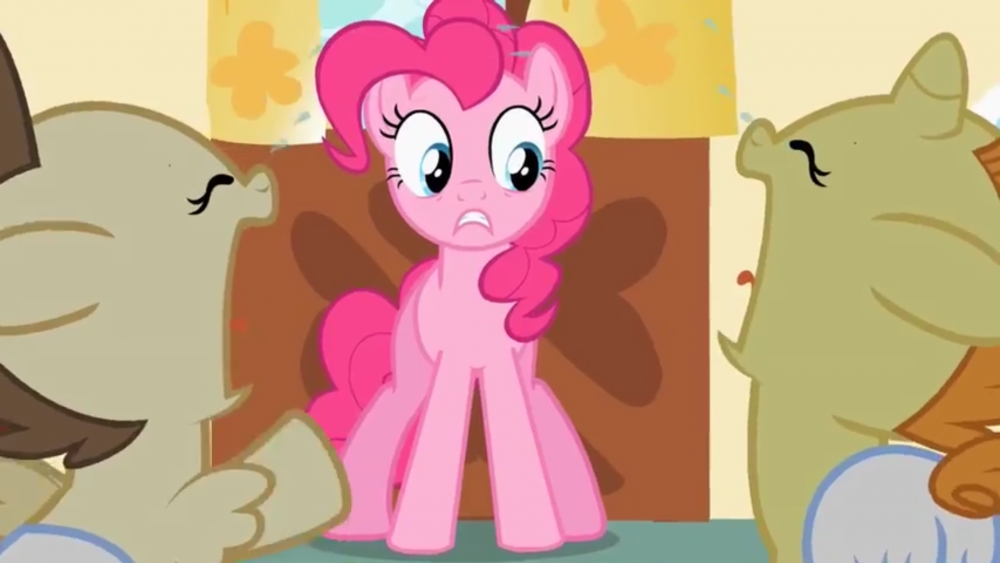 The twins immediately start crying, heedless of Pinkie’s attempts to quiet them. They only stop when Pinkie accidentally knocks a bag of flour onto herself, something they find hilarious. Pinkie’s savvy enough to see where this is heading. She tries bathing, feeding and changing, making a mess of each one due to the mischievous antics of her youthful charges. 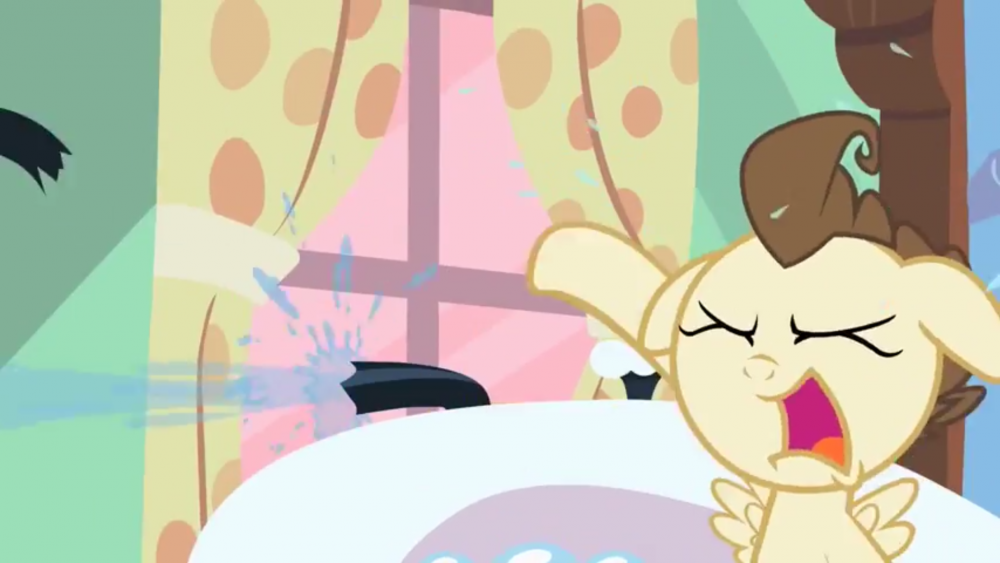 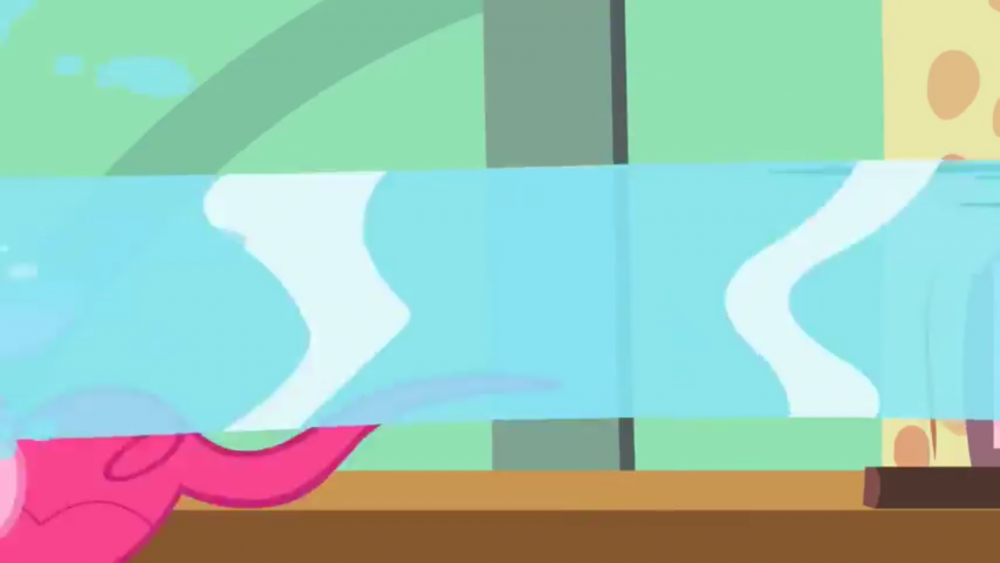 Twilight at one point comes to offer her help, but a tactless remark puts Pinkie’s back up, and she icily declines the offer of assistance, shutting the door in Twilight’s face. Realizing that Twilight’s comment about some ponies not being up to the responsibility is a pretty accurate description of her, she decides to get tough. And it seems to work, as the twins capitulate to Growly Pie… until her back is turned and they vanish from their crib.

Suddenly the tone shifts, the house becoming dark and eerie with a sinister shadow sliding about the ceiling, and Pumpkin Cake’s chewing on a squeak toy echoing oddly. The shadow reveals itself as Pound Cake, who can now fly. He proceeds to drag Pinkie all over the house when she tries to get him down. Pumpkin also gets in on the act with magic, phasing through obstacles, using telekinesis to get her toys, and even levitating, ignoring all Pinkie’s efforts to stop the two from running riot.

Finally overwhelmed, Pinkie gives up and sits bawling in the middle of the room. This checks the twins, who realize they may have gone too far, and they cut the antics, even pouring flour on themselves to cheer her up. An understanding with her charges achieved, Pinkie puts them to bed and then cleans up the entire place.

When the Cakes get home, she shows them the twins peacefully sleeping. They are astounded at how responsible Pinkie has proven herself in their absence and offer her the position of “go-to babysitter”. Remembering how tough a challenge the twins actually were, Pinkie balks, but hearing them say her name in their sleep convinces her to agree.

And all’s well that ends well.

A pretty heartwarming little tale of Pinkie learning to be responsible for baby ponies. I don’t have kids myself, but I imagine the scene of Pinkie just crying tears of frustration at disobedient infant antics would hit home for many parents. But I think anyone can feel bad for her and understand what she’s going through.

The episode is loaded with Pinkie Pie sight gags, such as teleporting through viewing windows in the hospital, jumping out of cakes way too small to actually hold her, and even being both the stand-up comedian and rim-shot artist at the same time. However, it doesn’t help her against the twins’ onslaught. The flour running gag was used well, even coming back around in the end when the twins use it themselves to serve as an apology / cheer up move.

Oh, that line from Mr. Cake… Some fans have speculated that his delivery of that line and the sheer illogic of the given explanation means that he’s trying to cover up the real reason for the “anomaly” implied in the episode quote: namely, Mrs. Cake’s infidelity. However, I disagree; and for more reason than just “this is a family show”… Since there are no male alicorns, the only way for the twins to get pegasus and unicorn genes would be if Mrs. Cake was unfaithful with a pegasus and unicorn simultaneously. That stretches the bounds of plausibility, if *ahem* nothing else. I think the handwave was telegraphed by Mr. Cake’s explanation – it doesn’t make sense in terms of real world genetics, but they’re going with it anyway, and the line is simply lampshade hanging.

I know some people are instantly turned off by baby episodes, and to be fair, this episode doesn’t really do that much to subvert the usual plot points, so I can understand why it might be off-putting to some. I don’t really figure it’s enough to make the episode unbearable for me, but I can see the criticism as valid.

The other criticism I’ve heard is that Pound and Pumpkin are simply too strong in magic and flying respectively to be credible, especially since young unicorns such as Sweetie Belle and filly Twilight are shown to have to try really hard to get their magic to work. It was pretty clearly spelled out that unicorn babies have odd magic surges, which is enough to explain it as far as I’m concerned. And since pegasus flight ability can be considered magic in its own right, I have no problem with the Pound Cake side of the equation either. Again, it’s not something I’d personally mark the episode down on, but I get why it’s a problem for some.

Pinkie (to Pound): This is a crib. It is only to be used for napping. sleeping, and on occasion, with permission, as an pretend old-timey western fort.

Pros: Some good visual gags. D’aaawww levels are off the charts.
Cons: Episode is about babies, with the usual tropes that apply.

Final Rating
5 – Rarity Rank: An episode that truly brings me joy. I cannot recommend it strongly enough.
4 – Luna Rank: An episode I enjoy, despite some flaws. It might not be perfect, but that’s fine too.
3 – Derpy Rank: An average episode for me. It engenders no strong feelings one way or the other.
2 – Discord Rank: An episode that is not to my taste, but others might find it worth watching. Once.
1 – Trixie Rank: Ursa Minor bait. I would avoid this episode at all costs, and suggest you do the same.

Hi again! It’s been a while since my last review, hasn’t it? How y’all doing? Next up is an AJ episode, and one I like. However, it did create somewhat of a scandal at the time. I’m sure you FiM veterans will know what I’m talking about, but I’ll go into more depth about it in the review, for those who might have only joined the fandom recently. Until then, stay sunny side up!