Fluttershy gets an involuntary early morning wake up call, courtesy of Rainbow Dash. After a bit of embarrassment and blushing, Fluttershy is quickly hustled out into the pre-dawn dark of Ponyville. Rainbow Dash is in a hurry to get her and Flutters to Sweet Apple Acres, because today’s Fighting Day – fighting for a share of the Apple family cider, that is. RD explains that Pinkie Pie usually gets there first and buys more than her fair share of cider, which ends up depriving RD of her allotment when the cider sells out.

Despite her determination to defensively defuse the disastrous dearth of delicious drink, this year looks like more of the same, since not only is Pinkie camping out at the front of the line, but she mentioned the idea to most of Ponyville, so the line is already super long. Then Pinkie rapturously gushes about how good the cider is, and how she hopes it won’t sell out before RD gets some! A bit later, the Apples open up the cider shop, and Pinkie, as is her wont, buys about a dozen mugs. Of course, the cider sells out just as RD reaches the front of the line. 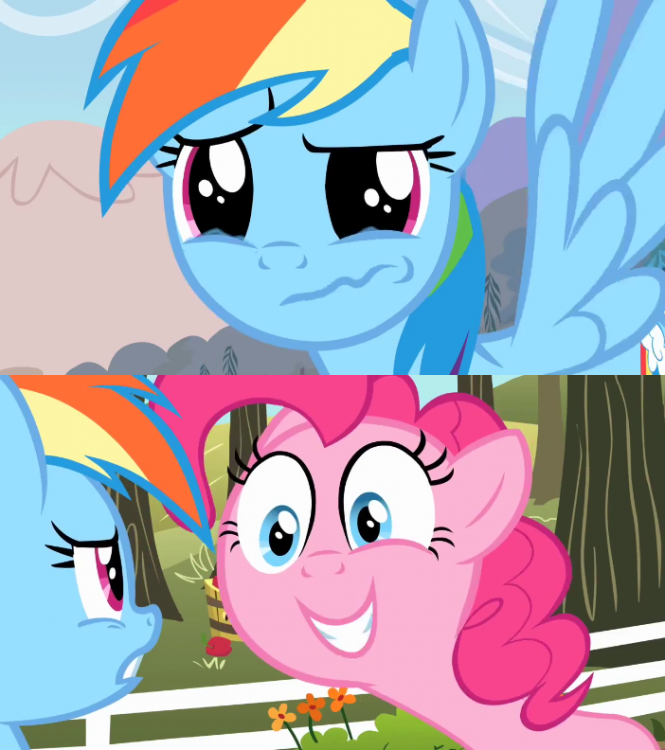 “The only thing more delicious than that cider are your tears of misery, Dashey!”

Suddenly a machine drives into view, with two ponies atop. These are the brothers, Flim and Flam, and they introduce (via song) their invention, the titular machine, which they boast can provide enough cider for all of Ponyville. All they need is the Apple family’s eponymous product, and 75%

Since this would lose money for the Apple family, they refuse to accept the deal, leading Flim and Flam to drop their affable façade and show their ruthlessness. They declare that they’ll simply become competitors instead, and drive the Apples out of business… and out of their farm and home, too.

Eventually, the two sides agree to a cider squeeze off, a competition on who can produce the most barrels of cider, with the winner getting exclusive rights to sell cider in Ponyville. Mayor Mare agrees to be the referee, and Time Turner agrees to be the, um, timer turner. And so a battle commences: good old fashioned pony power vs. machinery and magic.

After the Flim Flam bros take an early lead, Twilight asks if the Mane Six are allowed to assist, a judgment which Mayor Mare defers to the pair. They confidently claim that they don’t care if the entire kingdom of Canterlot assists the Apples, it being a lost cause. So the Mane Six join the fray… Fluttershy helps AJ knock the apples down, Pinkie and Apple Bloom catch them in baskets, Rarity and Granny Smith sort the good apples from the bad (Or as Rarity puts, the lovely from the horrid #RarityIsBestPony), Rainbow Dash assists Big Mac running the treadmill to crush out the apple juice, and Twilight magically stacks and tallies the barrels as they come out.

It works so well that the Apples start catching up, shocking the FFB into action. They speed up their machine, but it starts sucking up entire trees along with the apples, causing the quality control to reject all input. In desperation, they switch off the quality control, allowing them enough throughput to win the competition.

RD shows her loyalty by intending to fight for her friends, but AJ sadly agrees to the forfeiture of the cider rights and hence the farm itself. The FFB laugh in triumph as the Apples sadly drift off, the rest of Ponyville mourning along with them. The FFB start to sell their cider, but due to them switching off the quality control, the resulting mess is undrinkable, and an angry mob gather around them. Seeing which way the wind is blowing, the two quickly hightail it out of there, leaving in peace the Apples to sell the cider they produced during the competition.

RD is again left just missing out when the cider runs out yet again, but Pinkie offers her a mug from her purchases, making peace, while AJ dictates her letter to Celestia. (Reproduced here in its entirety, because it’s just that damn good…)

Dear Princess Celestia… I wanted to share my thoughts with you. [clears throat] I didn't learn anythin'! Ha! I was right all along! If you take your time to do things the right way, your work will speak for itself. Sure, I could tell you I learned something about how my friends are always there to help me, and I can count on them no matter what, but truth is, I knew that already too.

And so the ponies raise a mug together. 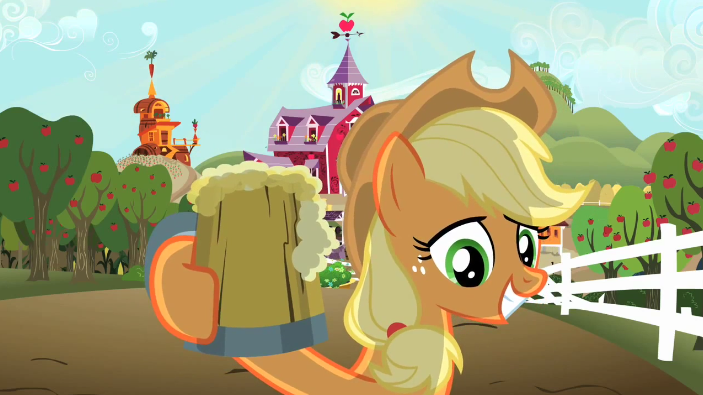 A good head but an ugly mug... and AJ is there too!

Boy, everypony is greedy in this episode. Pinkie is greedy, buying far more cider than is fair. The Apples are greedy, since they allow this, when it would be extremely easy to implement a one-pony, one-mug policy. It shows they care more about the money they make with the cider than having their product be enjoyed by the most ponies. The Flim Flam brothers are greedy, wanting the lion’s share of the profits, when it would have been far more sensible to accept an equal portion or even slightly less, since without the Apples’ apples, they have no ingredients to work with.

Speaking of the brothers, they’re quite a good addition to the villain roster. I hesitated a bit to actually categorize them as villains, rather than simply as antagonists, in the original sense of the term. Even as ruthless and greedy as they are, that alone doesn’t really tip them over the edge into villain territory. What does is how much delight they take in beating the Apples, even taunting them and laughing at their misfortune. Despite their name, they don’t really engage in any real dishonest behavior, unless you count trying to pass off as their cider what they made from the Apples’ produce. And their designs are pretty interesting. They are much taller and slimmer than the rest of Ponyville, in the style of Fleur de Lis, and their outfits are taken from The Music Man, the same movie being referenced in the song the brothers sing. As usual, Daniel Ingram’s composition is deluxe. There are plenty of funny things going on in the background, too. 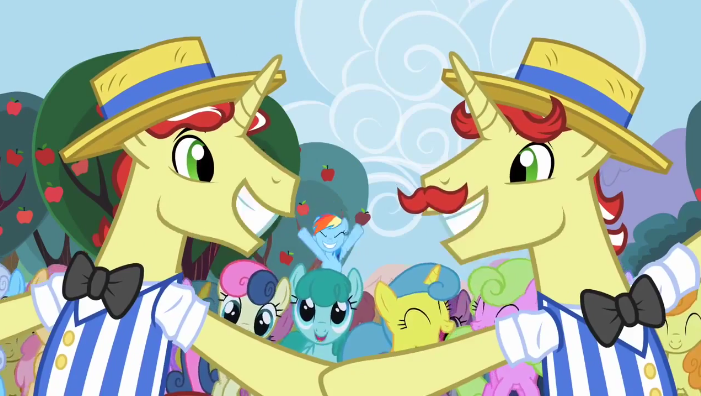 A point I’d like to make regarding the song. The chant of “cider, cider, cider” which repeats through the verses highlights a rather subtle theme that the episode explores… the power of mob mentality. In this episode, it both helps to set up the conflict and resolve it. Firstly, the song has bolstered the desire of the ponies for more cider, making it necessary for the Apple family to actually take the FFB’s bet. The smarter thing would be to just ignore the pair and pack up and go home. After all, the FFB have no product without being able to use the apples, or at least would have to find another source, cutting down their potential profits. But with the crowd already disappointed with the Apples due to the cider shortage, that option gets closed off.

But mob mentality is also what ultimately saves the day. Due to the FFB cider being ruined, the brothers have to clear out smartish to avoid things getting ugly for them, leaving the Apples with the de facto right to sell their cider. The moral of the story may be “quality beats quantity”, but this other underlying thread in the episode deserves to be highlighted.

Now let’s look at some bad behavior by other ponies. First, while Dash is, as usual, loyal and prepared to defend her friends, she also contributed to that negative mob mentality I noted earlier. When she is left ciderless, she inadvertently becomes the mob ringleader. She’s also shown as being much more eager than anypony else to get some of the FFB’s cider during the song – after initial skepticism, I must add in her defense. I think she can be forgiven, though, since her heart was in the right place, and her behavior was a result of her understandable frustration at losing out on the cider, largely due to Pinkie's careless greed and the Apples’ lackadaisical approach to selling.

Pinkie also gets the Bad Behaviour Ball. First she buys way more than her fair share of the cider, and then she goes on to talk to Dashy’s face about how great the cider is and how she hopes it doesn’t run out, which it obviously will, thanks in part to her! Again, though, she manages to redeem herself by actually giving Dash a mug of cider at the end.

As you could tell from the plot synopsis, I like the ending. Rather than a generic restatement of the moral, it actually bucks the usual trend of the show and provides amusement. Speaking of morals, I loved the bit when Twilight offers to help and AJ simply says “I’d love the rest of my family to help.” A far cry from the pony who almost ruined Ponyville through stubborn refusal to accept help in Season 1. I like when something like this is shown to actually have stuck and not be ignored. And speaking of amusement, there’s the opening bit when Rainbow Dash pulls off Fluttershy’s bedclothes, and she blushes and covers her chest, despite the fact that the ponies hardly ever wear clothes anyway. Funny, if not making a lot of sense when scrutinized. Horses don’t have pectoral mammaries. Although covering the correct spot would mean that the scene would not have gotten past the censors, so this is just a case of me being pendantic again.

If you watch carefully during the song, while the rest of the Apple family look uncertain, Apple Bloom is smiling and very much enjoying the performance.

RD is about to get some cider, when AJ lassos the barrel and accidentally knocks her mug out of her hooves, spilling the cider on the ground.
Rainbow Dash: <With a mouthful of cider-mud> “Is this some kind of cruel joke?” 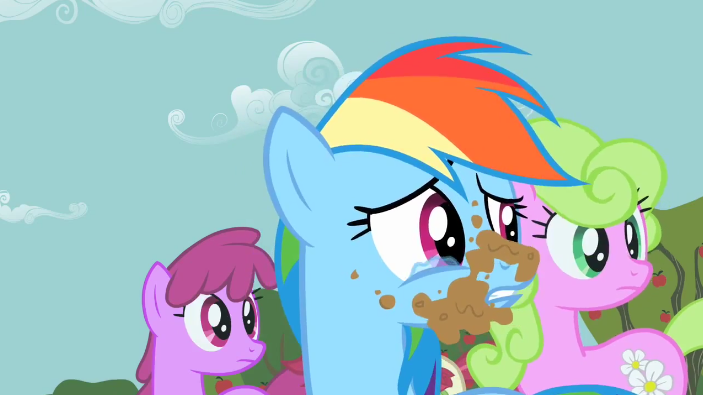 Yes, Dash, yes, it is: the writers' cruel joke.

When Twilight announces they're catching up to the Brother, Flim does a spit take right into his brother's face.

Pros: Good villains in design and demeanour. A nice twist on the Letter to Celestia pattern. A surprisingly subtle secondary moral. Some really sad moments. A rarity: a moral from a previous episode is actually remembered.
Cons: Some bad behavior by some of the ponies.

5 – A Proper 1420 Rank: A great episode. To be savoured at every opportunity in your community.
4 – Sweet Apple Cider Rank: A good episode, but something in there disappoints slightly.
3 – A Glass of Water Rank: An average episode. Nothing too good or bad.
2 – Mine’s got Rocks in it Rank: Worth watching once. Just don’t break your teeth.
1 – Flim Flam Jerk Cider Rank: Dreck.

And that is the last episode to focus on Applejack for a while. Next up is Read It and Weep a.k.a. Dash’s Single Target Sexuality Eggheadedness. Come and read my words about the words that Dashy reads, next time around. Until then, make any comments crass, complimentary or contrarian you like (only not the first one, please), and stay sunny cider up.