Hi everyone, this is Woohoo here with another edition of Musical Manslaughter, where you can't spell 'slaughter' without 'laughter' and these songs are jokes.

Well, here I go again on my own, posting on the only blog I've ever known. Anyways, in my last entry of MMS, I promised to be much more active here... and so far, I've been doing a pretty crappy job at it.  Alright, enough of my rambling. For this edition of MMS, guess where we are going? If you guessed "the past," then have yourselves a cookie.

Yep, we're going back to the past to shred a shitty song that sucks ass. Since I started this blog, I feel I have the obligation that for every "modern" song I shredded, I would shred a "classic" song as well. I'm not one of those people who believes all music in the past is perfect and everything modern sucks. In my opinion, every generation had bad music. For this specific song, we're going back to the palindrome year of 1991, a year of desert storms, silent lambs, crumbling empires, and most importantly, the birth of a legend, ME!

*sniff sniff* Do you smell something? That smell, a kind of smelly smell, a smelly smell that smells... smelly. No, it's not anchovies, or the salmon in the logo. It's the song I'm shredding today, and the song is... "Smells Like Teen Spirit" by Nirvana.

Oh boy, I can already here the keyboards typing: "how cud u haet dis song!? dis song n nirvna maed rawk gret agin! go bak to the 80s u rtard! >:(" Wow, I've really outdone my self with that comment. Anyways, yes, I officially hate this song now. I used to dig it when I was younger, but the older I got and more times I've listened to it, the less I liked it. Now, I can't stand listening it anymore. Why do I hate the song that supposedly put Seattle on the map as well as saved rock from the 80s? Let's break it down.

My first problem with this song is really just a nitpick: the title. Probably the second time in this blog's history that I complained about a song's title, with the first time being my "St. Anger" review. "Smells like Teen Spirit," what kind of title is that? Did they come up that title all by themselves or did they help from manatees. I just don't get it. Unlike "St. Anger," I don't think any of the lyrics in this song correlate to the title at all. Maybe this sets the tone for the rest of the review. Now let's get into the actual song...

So the song begins with its recognizable riff, starting off clean but then crescendoing with drums and bass. When I was younger, I kinda liked this riff. It wasn't the greatest riff, but wasn't terrible either. (I'd probably rate it 3.6 out of 5 roentgen.) However, as I got older and my musical taste grew more refined, the less I liked the riff. Often times when I heard this song, I would think, "That sounds pretty familiar..." Until finally, I came to the realization that this is one of the most unoriginal and overused guitar riffs I've ever heard. I mean, where have I not heard this riff before?! Every time I hear this riff, I find myself singing "Louie Louie" or "Wild Thing" or the chorus to "More Than A Feeling." (All of which are better songs IMO.) Granted, all those songs don't use the exact notes and chords, but they're structured very similarly. I know I've rambled on about this riff for an entire paragraph, and frankly I wouldn't have problem with it, if it weren't for all these people claiming this is one of the greatest guitar riffs of all time. Wow, only 15 seconds into this damn song and I'm already angry. *sigh* Better calm down...

So after the "Louie-Wild-Feeling" riff-off, we finally reach the lyrics...

Load up on guns, bring your friends

It's fun to lose and to pretend

She's over-bored and self assured

Oh no, I know a dirty word

*deep breath* Sorry about that. I just hate when song lyrics make absolutely no sense. I have a feeling this song will score really high on "nonsensicality," and not in a good way. Let's move on...

*sigh* I never thought I would say this again but... why you gotta be so repetitive?

I'm not gonna waste too much time or anger here, mostly because the damn chorus is next!

With the lights out, it's less dangerous

Here we are now, entertain us

I feel stupid, and contagious

Here we are now, entertain us

A mulatto, an albino, a mosquito, my libido

*seething* Wow... just fucking wow... Where do I even begin with this chorus!?

Holy shit on a cracker is this song making me angry. I haven't been this level of anger at a song since my "Shake It Off" review, and that's saying something. It drives me bonkers to hear people say how this song as well as the whole Grunge movement supposedly saved rock music from the alleged horror that was "Hair Metal." (Boy do I hate that term, but I still use it anyways.) Say what you want about how overly ridiculous that era of music was, and frankly I have my own gripes with that era, but I think Hair Metal had a lot substance and a helluva lot more style than Grunge. Change my mind!

Anyways, back to the regularly scheduled review...

I'm worse at what I do best

And for this gift I feel blessed

Our little group has always been

And always will until the end

This is probably the part of the song that actually makes any sort of sense. I believe this is Kurt admitting that despite being a professional musician, he was pretty terrible at it.

He also stated how loyal his bandmates were to him, seeing how they disbanded immediately after his death. Sadly, this is only "highlight" of this song.

After another repeat of that fucking slog of a chorus, we reach the guitar solo... except I don't really call it a guitar solo. It's just the vocal melody mimicked on the guitar, and frankly, I hate those kind of "solos." Not only was Kurt a terrible vocalist, he was a lackluster guitarist too. Seriously, why do I keep seeing him ranked in most "top guitarists" lists?! I've seen ten year olds play eons better than him! *sigh* I'm losing my mind right now... but I can't quit now, I'm almost to the end.

And I forget just why I taste

Oh yeah, I guess it makes me smile--

Y'know what? Fuck it! I don't think I can take this anymore. I'm just going to skip right to the end. After the third slog of the chorus, we get this for an outro!

…La-dee-da-da, ba-da-dee-da, and Obama, and Osama, and a llama, and lasagna... Wait, the song is already over? The outro was getting so monotonous that I was adding my own words to it. I swear, this song feels like the "Shake It Off" of 1991. Alright, let's wrap this up.

And that was "Smells Like Teen Spirit" by Nirvana. Do I hate this song? Well, if you asked me years ago, I would've said "nah." Nowadays, hell the fuck yes! Let me break it down for ya.

First off, I am not denying the impact that "Smells Like Teen Spirit" made in the history of music. If you like this song, more power to you. Now that I got out of the way, back to my rant. It absolutely astounds me that song like... this has become so popular and iconic and, worst of all, overplayed as fuck for over 28 years. Why? I just don't get it. The lyrics are nonsensical, Kurt's vocals are practically incomprehensible, the music is amateurish at best (although I kinda like Dave Grohl's drumming), I just don't get it. This song makes feel like having an anal evacuation.

Now for the final score. I haven't seen a score this high in a while. 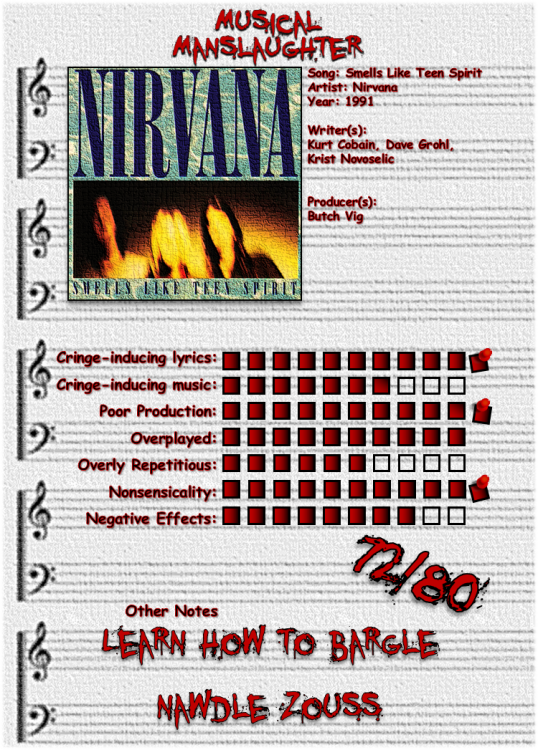 And that concludes this entry of Musical Manslaughter. Once again, if you like this song, that's fine. Frankly, a little part of me wants to enjoy this song again. As for next entry, all I can say is... it's coming out in April. This is Woohoo signing out. Enjoy your Leap Day.