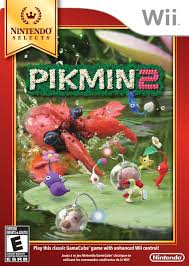 After the release of Pikmin in 2001, the game, to many peoples' surprise, was a smash hit on the Gamecube, both financially and critically. Over one million copies were sold worldwide and it's still considered one of the greater Gamecube titles. With how well the first game did, the head of Nintendo, Shigeru Miyamoto, would announce a sequel being in development in December of 2002.

Pikmin 2 picks up right where the series left off. With the help of the pikmin, Captain Olimar was able to recover his ship parts and return back to the planet of Hocotate. Upon returning, he finds out that the company he works for, Hocotate Freight, is in sever dept. Shocked, the Captain drops the giant bottle cap he brought back from the planet as a gift for his son. Upon further examination by the president of Hocotate Freight, the cap proves to be worth around 100 poko's, which is the currency on Hocotate.

After finding this out, the president sends Olimar back to the planet to find more enlarged items. Though, he also sends a new astronaut named Louie along with the Captain. With that, the two blast off back to the planet, reunite with the pikmin, and begin searching once more.

The story is harmless enough, but it's not as entertaining as last time. The first game's story filled you with a sense of urgency. You know that something bad could happen to Olimar if he doesn't find all of the ship parts. Here, it's all about paying off a dept. I'm sorry, but I wouldn't find that interesting, especially for a game made by Nintendo. There's nothing majorly wrong with the story. I just think Nintendo is capable of more.

But, what about the gameplay? Well, for the sake of time, Pikmin 2's play style is almost completely identical to the first game. Olimar controls the same, too, stiff movement and all. You run through the open world, expand your army of Pikmin, and bring large objects back to the ship. However, this time, you aren't collecting ship parts. You're collecting random items like 7 Up caps and Duracell batteries (There's quite an amount of product placement in this game) and bringing them back to profit them so you can pay off the dept. Each item is worth a different amount. For example, while a 7 Up cap may be worth around 100 pokos, an orange could give you 300 pokos.

When you begin your journey, Olimar and Louie get separated. You find Louie during the first day and, depending on what kind of player you are, he can be really useful. Olimar and Louie can both man their own separate armies of Pikmin and split up to take on multiple tasks. You can alternate between both astronauts to manage your work more effectively. I never really did so, though. I'd rather have all of my Pikmin in one place.

The pikmin have also seen an upgrade. Blue pikmin can still walk in water with ease, but red and yellow pikmin now have their own immunities as well. Now, red pikmin are completely resistant to fire, and yellow pikmin are immune to electricity. These immunities will prove useful, because the game design has added hazards like electrical fences and other things of the sort.

However, that’s not where the upgrades in the pikmin end. Pikmin 2 has two completely new types of pikmin this time around; purple pikmin and white pikmin. White pikmin are swifty little guys. They’re completely immune to poison and if they’re swallowed, they’ll give damage to the enemy that devoured them. They also have a keen treasure-hunting skill, allowing them to locate all sorts of items hidden underground.

Purple pikmin are the strongest pikmin of them all. When thrown at enemies, they hit like tanks, taking away large portions of health. They can also carry more, too. They can carry 10 pounds of weight, which is the equivalent of the weight that can be carried if you threw 10 of the other types at an object. Some items can only be brought back to the ship if you utilize these purple pikmin.

Both of these pikmin are awesome, but they don’t produce from pellets. Instead, you need to get them from certain flowers scattered all across the land by chucking other pikmin into them. The flowers will then spew the pikmin back out as a white or purple pikmin, depending on the flower color.

To me, this is the absolute WRONG way to do it. Each of the original three types have their own pellets. Even in Pikmin 3, a game I’ll be reviewing later, has pellets for all five of it’s types. On top of that, these flowers can only spew about six or seven white or purple pikmin before they die. So, what happens if you run out of these pikmin in a situation that you need them? Well, the only thing left to do is end the day early, come back to the spots the flowers were the next day since they’ll respawn, and restock then. This can make getting more purple and white pikmin an absolute chore and it’s something I can’t stand.

With these new Pikmin, Olimar and Louie are opened to four new areas to explore. Like I said, the scenario is the same as last time, however, we have a new addition to the game design; caves. Each area contains a couple of caves for Olimar and company to explore. Think of them like the dungeons in the Zelda games. Each cave contains a certain number of treasures to find, usually ones that are worth a lot of pocos. These caves also challenge the players with puzzles, aggressive enemies, and finally, a boss at the end.

Personally, I found these caves to be fair in terms of structure. They bring in a good challenge with a huge payoff (Most of the time) and they rarely drag… except the final cave. The final cave takes a fair challenge and shifts gears. What we have in the final cave is a gargantuan, labyrinth-like area where purple and white pikmin are constantly mandatory to progress. And, like I said, if you lose all of your purple and white pikmin while going through this area, you’ll need to backtrack to restock again.

The graphics in Pikmin 2 are definitely a step up from the last game. Each area has been given a beautiful photorealistic look, making it seem more alive. The character models are also more neatly textured and rendered. Little details like that make Pikmin 2 a gorgeous game to marvel at.

The soundtrack is also pretty sweet, too. In fact, one could argue it’s the best soundtrack in the series. In my opinion, it’s not. For me, that title goes to the original game. I can hum almost every track in that game flawlessly. However, that’s not to say Pikmin 2’s soundtrack is forgettable. The overworld theme in Pikmin 2 is one of the most memorable themes in the series. I also get a small kick out of the Awakening Wood’s music as well as Perplexing Pool’s music.

So, does Pikmin 2 improve on the original game. Well… yes, and no. This game definitely has a noticeable graphical update and the caves are pretty fun to travel through, but it also has quite a few unfair moments peppered in between. They’re avoidable, but when you encounter them, they really put a damper on the experience. I would still recommend Pikmin 2 to those who liked the first game. I know some people who even like this game more than the original. At least rent it. You might see something I don’t.