Forgive me, girls. I know I’m not an athlete, but shouldn’t the Running of the Leaves involve actual running? – Twilight Sparkle to Applejack and Rainbow Dash

Applejack and Rainbow Dash are engaging in a friendly match of horseshoe tossing as the episode begins. Their good natured banter is marred a bit when Applejack ends up the winner, and is just a little bit too smug about it for the somewhat-of-a-poor-loser Rainbow to overlook. Rainbow suggests an Iron Pony Competition to settle once and for all who the better athlete is, and they seal the wager with spit and a hoof bump.

After the credits, Applejack explains to Twilight and Spike what they are planning. Well, she tries to, since Rainbow keeps blurting out what she was busy saying, while doing stretches. Twilight agrees to be the judge, and Spike takes it upon himself to be the announcer, as the rest of the Mane Six arrive to watch.

The first event is the barrel weave, in which Applejack manages to best her previous time. However, a slight nudging of the barrel nets her a time penalty. Now this scene is great for countering fans who say Applejack is no good at “fancy mathematics”, since she adds up the times just fine. She’s also pretty much the one who keeps the finances in check for Sweet Apple Acres, so obviously, she can do maths. Some fans really need to realize that sometimes a funny line like “Don’t you use your fancy mathematics to muddy the issue!” is just a funny line, not the basis for the entire character. (Yes, I’m exaggerating. Sue me.

Rainbow’s agility is on display during her run, which is slightly slower than AJ’s time without the penalty, but still results in a victory for the multicolour-maned mare. As the events continue, more and more ponies start arriving to watch, leaving Twilight astonished to see how much the crowd has grown. The events include kicking footballs, rodeo, roping poor old Spike into a roping, etc. and any of them using the legs seems to favour the apple-bucking Applejack. Ball bouncing, however, is all Rainbow, which is a nice little reminder of Dragonshy. She also wins the bronco buck, although I suspect Spike was tired after Applejack’s turn, which might not be entirely fair.

What definitely isn’t fair is Rainbow using her wings in the push up contest, although Applejack tries to ignore this in favour of being “a good sport”. However, as the competition continues, Rainbow begins to use her unfair advantage more and more. In the final event, Tug-o-War, Rainbow simply flies up to avoid being pulled into the mud pit, lifting poor Applejack into the air and leaving her dangling just like in Look Before You Sleep. When she tries to tell Rainbow off for cheating, she accidentally lets go of the rope, and falls into the mud. Rainbow claims victory, but Applejack is now thoroughly ticked off, and calls her out for cheating. Rainbow points out that they never agreed that she couldn’t use her wings; Applejack counters that she thought it was too obviously cheating to mention it. When Rainbow claims she would have won in any case, Applejack challenges her to a wingless rematch on the morrow to prove it; it’s the Running of the Leaves, a marathon to shake off the fall foliage. 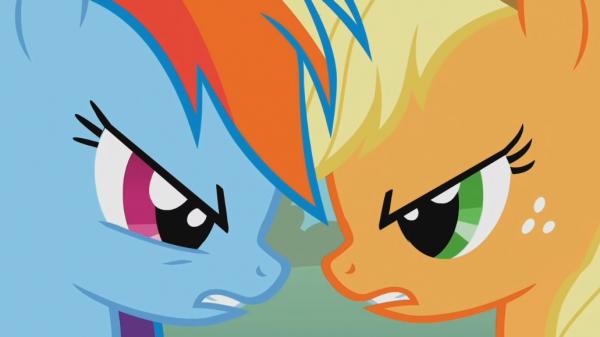 The following day, Spike urges Twilight to hurry up, since he wants to be the announcer for this competition as well. His hopes are dashed, however, when it turns out Pinkie is already “the eye in the sky” announcer, commenting on the race from the Twinkling Balloon. Luckily, Pinkie is more than willing to let Spike be her co-announcer, and hauls him up into the Balloon with her.

Meanwhile, Applejack reiterates the terms of the race, and to ensure compliance from Rainbow, ties her wings up. Both are flabbergasted when Twilight joins them and the rest of the racers at the start line, and Rainbow pokes fun at Twilight’s lack of athletic ability and the fact that she has never run a race, only read about it before. Her jibes are actually pretty funny.

The race begins, and Applejack and Rainbow lead the pack. Pinkie and Spike comment on the action, but Pinkie being Pinkie, her observations are all pretty far out of left field, leaving poor Spike to try to keep up the best he can. The race starts out pretty on the level, and the leaves are falling as the pack forges ahead. Front runners Rainbow and Applejack exchange some words, and Applejack suddenly trips. She immediately thinks that Rainbow tripped her, but Twilight arrives to point out that she tripped over a rock, and tells Applejack that she needs to pay more attention to where she is running. Somehow, Applejack is able to make up the ground, and passes Rainbow just as she decides to slow down a bit. Rainbow in turn catches up, and remarks that the race isn’t over yet, to which Applejack replies “It is for you!” and runs on ahead. This time, it’s Rainbow who trips over something and blames Applejack for it. Twilight, again coming on the scene a short while later, tells Rainbow that Applejack would never cheat, and even points out the stumbling block, a stump. RD is not convinced, even though she tripped long after Applejack had pulled far ahead of her, and decides that the cheating is now on.

The two continue to try everything to slow down their rival, including using branches, tree sap, and even a swarm of bees (although that backfires on AJ, since the burst of speed RD gets running away from the bees puts RD ahead of her.) 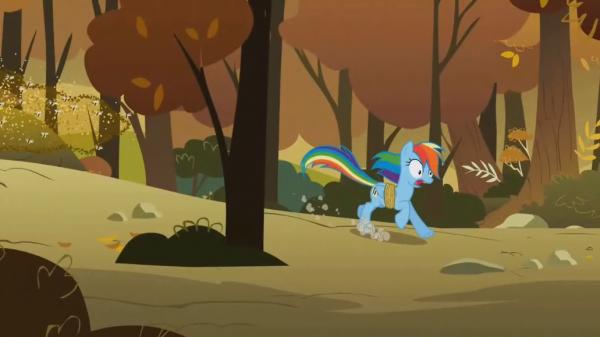 Not the bees, NOT THE BEES!

RD manages to send AJ off the track by reversing a direction sign, and she ends up on a cliff. Luckily, she gets a lift from the Balloon to get back to the front and continue running, prompting an outraged RD to point out that they agreed on “no flying”. AJ replies that they technically agreed on “no wings”, in a lovely little bit of loophole abuse. As they reach the final stretch, AJ and RD are so busy pulling each other back that the rope tying RD’s wings comes unraveled. 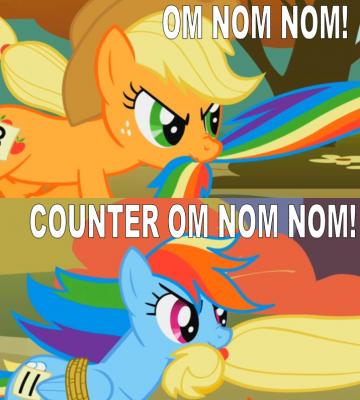 RD declares “all bets are off” as she starts to gain altitude, but Applejack pounces and brings her down again, as they cross the finish line in a big ball of violence. Still arguing over who came first, they are shocked when Pinkie announces that they tied… for LAST place! Twilight comes up with a medal, but admits she didn’t get first place, only fifth. She says she did so well because she followed her book’s advice: pace yourself and sprint to the finish when the other runners are tired out. Princess Celestia herself comes out of the crowd, being there to watch the Running of the Leaves, one of her favourite events of the year. Both AJ and RD apologize for their behavior, but Celestia forgives them, saying that she understands how a pony can get swept up in competition. Twilight finishes by stating the moral of the episode: to remember that the friendship is more important than the competition. The poacher.

Since they were concentrating on cheating each other and not on knocking down leaves, there is still a need for more running, and Applejack and Rainbow Dash, restored to their former friendly rivalry, set off into the sunset together.

When Rainbow and Applejack are staring each other down after the marathon challenge, Rainbow blows a raspberry, causing them both to giggle for a moment, then their expressions get serious again.

Rainbow and Applejack teasing Twilight about learning how to run from books:

AJ: “Have you ever run a race?”
TS: “Well, no... but I do know a lot about running.”
RD and AJ trade glances, and both try to keep a straight face
RD: “And you know this from…?”
TS: “Books! I’ve read several on the subject.”
RD falls over laughing
RD: “What d’ya read, ‘The Egghead’s Guide to Running’? Did you, did you stretch out your eye muscles to warm up?”
RD is rolling on the floor at this point
RD: “Get it? Eye muscles?”
TS: “Scoff if you must, Rainbow, but the Running of the Leaves is a Ponyville tradition, and since I’m here to learn, I’ve decided I should experience it myself.”
AJ is also sniggering, but tries to be serious for a moment
AJ: “Well, I think that’s just dandy, Twilight. Good luck.”
RD: “Yeah. See you at the finish line… tomorrow!”

Twilight passes Rainbow and Applejack during one of their altercations in the woods, and delivers the wonderfully backhanded insult quoted above.

A pretty straightforward episode here, driven by the rivalry between two good athletes. Pinkie and Spike’s interactions are also funny, with the pink pony’s purile pontifications mystifying the less lateral-thinking lizard. The dialogue overall is very enjoyable, as is the lovely fall scenery.

There are a few minor problems, as mentioned: how Rainbow concluded that Applejack tripped her when she was nowhere near her at the time; if Twilight was going so slowly, how could she catch up enough to get fifth place; both Applejack and Rainbow being a little too willing to follow the letter of the law than the spirit. But these are relatively minor, and the episode is highly entertaining.

Stay leafy side up!