There are few enough sequels that can be said to be superior to the original movie in the series, but I think “Equestria Girls 2: Rainbow Rocks” manages to make the list. Although it also has its flaws, I found it a lot more entertaining than the first movie. So today, I’m going to share some of the impressions I had following my first viewing. When I can get hold of the DVD, I may make a more in-depth analysis, so this one might be a little rough around the edges. 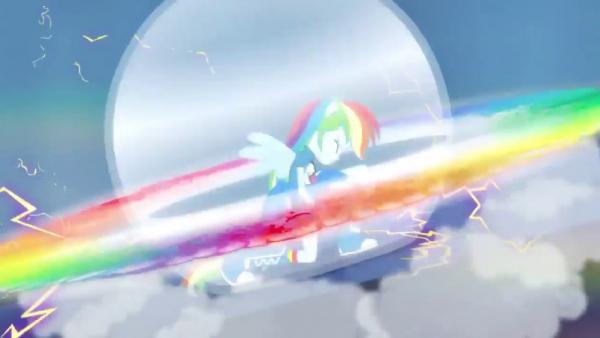 1. This being a movie featuring a Battle of the Bands, the songs obviously played a huge role. The music I thought was fantastic all around. The Dazzlings’ songs really were atmospheric, and sounded almost otherworldly. I could quite easily believe that there could be some kind of hypnotic power in the Dazzling’s voices. The visuals also matched the sounds well, with the way the girls moved and swayed reminiscent of snake charmers.
The Rainbooms also had a few good songs, and they all sounded good. Par for the course from Daniel Ingram, I expected no less. The rest of the talent line up was serviceable, with Snips and Snails providing a stylistic suck rap number and mike drop, and even Trixie getting a scene with her band… pity she couldn’t sing more than one line of her chorus, but then, the less I see of Trixie, the better. I did feel sorry for her when her chance at the final was unfairly taken away from her by the Dazzling’s manipulation of Principal Celestia and Vice-principal Luna, though... I don’t like having to feel sorry for Trixie. Maybe this should have gone in the flaws section below.
2. The way Sunset Shimmer’s story arc was handled. While the Humane Five had obviously forgiven her and welcomed her into the group, the rest of the school are understandably less eager to forget her former bad behaviour. (They did have to endure it for 3 years, after all.) Despite this, she managed to avoid backsliding a la Discord, even when she had her confidence shaken by the Dazzlings. She also managed to provide the means for summoning Twilight to help them, had several moments where she kept the group from falling into conflict, and in the end, stepped up to save the day. This movie really should have been called “Equestria Girls 2: The Sunset Redemption”. At any rate, this should have made up for the rather quick heel face turn at the end of the last movie, which generated a fair bit of criticism. One problem is that Snips and Snails don’t seem to be as mistrusted as SS, even though they were just as guilty. A minor issue.
3. The introduction of Vinyl Scratch in the lead up to the finale was a great touch. Particularly since you could often see her in the background, walking around wearing the headphones that ultimately protected her from the siren’s voices. It made it natural in hindsight that she would be the one Spike brings to help the Humane Seven, and to provide them with the equipment necessary to counter the sirens’ song-spell and defeat them. Bass cannon, indeed!
4. Speaking of the finale, it was more of a natural progression in this movie. I always thought the end of the first
Equestria Girls came a bit out of left field, what with Twilight’s crown turning SS into a literal demon. This time, in contrast, the final fight was built up throughout the movie, and paralleled Sunset’s own progression from Atoner to Hero. It was also very exciting to watch, and seeing Sunset Shimmer get her own (much less frightening than the last) alternate form was superb.
5. Maud’s cameo. Being a fan of her all the way down to my bedrock, (no off-color puns, please) it just made the movie for me when she appeared in the kitchen to “feed” Boulder a midnight snack. There were a few other notable human versions of various ponies, such as Lyra and Bon Bon, which were also fun to see.
6. The characters were mostly spot on, with Rainbow’s tendency to hog the limelight and show off brought up. There was also Rarity’s love of outfits that was turned against her during the semi-final performance; ditto with Fluttershy’s shyness. Twilight was so busy trying to repeat her feat from Magical Mystery Cure by creating a counterspell that she couldn’t see the group disintegrating in front of her eyes. Pinkie was getting annoyed that she wasn’t having fun in the band, and Applejack was trying to reign in Rainbow, as she usually does. Luckily, the new addition, Sunset Shimmer, had enough of an outsider perspective to keep apart from the conflict and see the way to resolve it, which shows her own development and justifies her joining them.

So that was a list of some of the good things I noticed. I’m sure there are more that will become apparent to me on repeated viewings, but for now, I’m going to have look at the flip side of the coin.

The Things that "Rainbow Rocks" Tanked 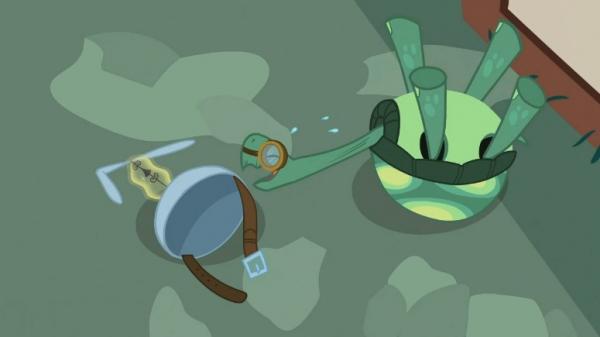 1. Let’s examine the antagonists a bit more: The Dazzlings.
Creatures banished from Equestria by Starswirl the Bearded himself, this trio of sirens have apparently been kicking around the alternative human world for quite some time. First and foremost, we have Adagio Dazzle, the leader, planner and basic evil driving force of the group. Following her lead are Aria Blaze, the snarking, perpetually bored and angry one, and Sonata Dusk, the perky, somewhat ditzy and generally too nice-to-be-a-villain one. A picture of them appears below: (spoilered for size)

Ahem. Hehe. How did this picture of Azula, Mai and Ty Lee get here? 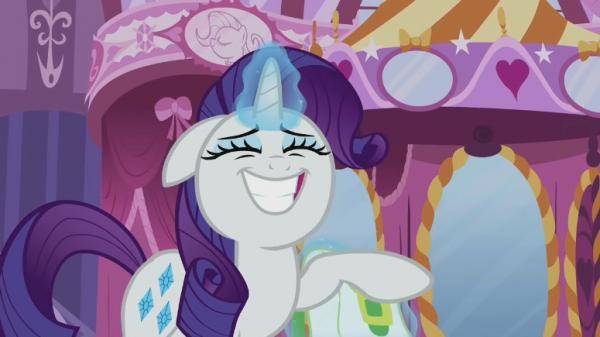 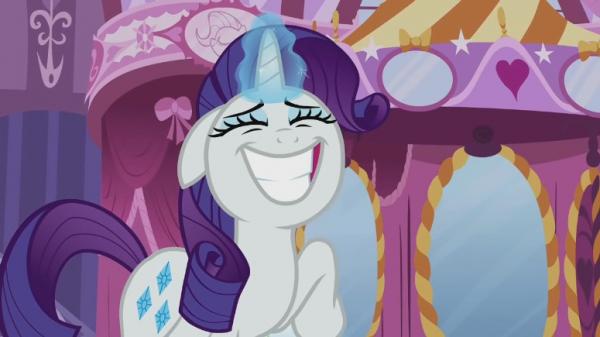 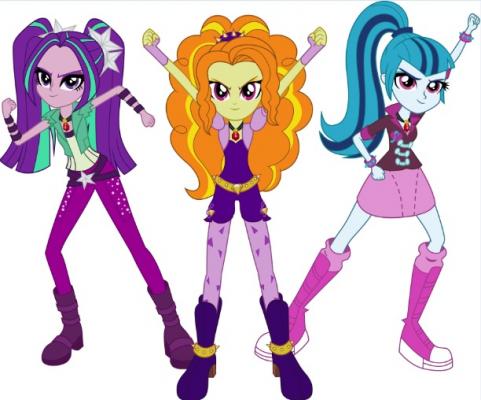 That’s better.
PS: I lied about the spoilered for size thing.

Yes, the Dazzlings are pretty much expies of the three main female protagonists from Avatar: The Last Airbender. While it’s not objectively a bad thing to borrow personalities, (imitation is the sincerest form of flattery, after all) once I had the thought, I couldn’t get it out of my head, and I found it really distracting. There just wasn’t enough uniqueness there for me to form any lasting connection to any of the three characters. Blame A:tLA, but I just see Azula, Mai and Ty Lee. Personality aside, the designs were very creative and the colour schemes pleasing to the eye, so that’s a plus.
2. The exact nature of what the Dazzlings are wasn’t explored enough for my liking. Given that they were sent to the alternative world by Starswirl, who lived thousands of years ago, either they’re immortal, or they’re body snatchers. They certainly seemed to have a form that was separate from the human form, but when their gems were destroyed, the girls lost their abilities and became “normal teenage girls”, according to Twilight. And normal teenage girls with horrible singing voices, according to my ears. Does this mean the sirens themselves (who appeared as ghostly horses, not unlike the Windigos from Hearth’s Warming Eve) were destroyed, freeing the three girls? Or were the three of them just Brought Down to Normal by the loss of their gems? In which case, it seems a little bit harsh.
There was also no real resolution to the Dazzlings’ story. They’re just sort of beaten and then the movie ends.

Where the “Meh” Things Were

1. Well, good ole Flash Sentry was in this one. Although he remains largely a flat character, at least he did misbehave once or twice, providing some hints at deeper character (aka flaws). In particular, he seems to throw a little hissy fit when his band is knocked out of the competition. He also proved no less vulnerable than anyone else to the Dazzling’s magic. Of course, there wasn’t enough time or focus to develop him much, but at least the romantic subplot didn’t end up distracting us from the plot.
2. The setup for alternative Twilight didn’t amount to anything, but instead, pony Twilight came back. This is a bit of a mixed blessing. It did give us a brief pony scene in Equestria, but it also retroactively nullified one of the central plot points of the first movie, that there was a deadline after which travel between the worlds wouldn’t be possible for a very long time.
I suppose they do justify it by introducing Sunset Shimmer’s diary that connects the two worlds, but it takes virtually no time at all for Twilight to engineer a brand new portal, and this one seems to be permanent. So watch out Flash x Twilight haters, now she can visit him any time she feels like it. Maybe the third movie will end with the two worlds colliding like in the comic series, and having to be permanently separated. It may be your only hope to avoid seeing this pairing.
Still, they did have to bring Twilight back to Canterlot High somehow, so at least they did provide some explanation of how it was possible, even if it was a little too convenient.
3. Princess Celestia and Luna were no shows in their Equestrian forms, and the human versions became little more than extensions of the plot, which could be considered a step back from the first movie, but then again, the focus was more on the conflict. I just wish we could have seen a little bit more of them.

So to sum it all up, I really enjoyed Rainbow Rocks. I think it was better written story than the original Equestria Girls. The music was better and more varied than there as well. The three antagonists were decent, if a little too similar to A:tLA, and managed to be a legitimate threat. The voice talent, both singing and speaking, was up to its usual grand standard. The conflict in the Battle of the Bands was handled pretty well and provided a very exciting and satisfying climax. The denoument was a little bit too quick, and left some things unexplained, but perhaps we’ll find out more in the next movie. You know there’s going to be one.

The portrayal of the Humane Seven was generally consistent with the respective pony’s characters and the way the human versions were shown in the previous movie. Sunset Shimmer steals the show with her character arc, and finally earns her happy ending and it was done in a rather realistic way. Unfortunately, Flash Sentry and the Principals were not given as much attention.

So all in all, I’m pretty satisfied that Rainbow (indeed) Rocks. Share your thoughts on the movie and this review in the comments below if you feel the urge, and in any case, stay sunny side up.