Our intrepid Cutie Mark Crusaders Pin Twins Three Strikes Bowling Dolls arrive at the Ponyville Bowling Alley, aiming to get their cutie marks in bowling. However, bowling soon turns to blowing it: Sweetie Belle gets only gutter balls - and is incongruously happy about it - and Scootaloo bucks her ball so hard it ends up ricocheting all over the bowling alley, earning her some shocked stares from the other bowlers. On her turn, Apple Bloom appears successful in getting a strike. She also hears a spectator pony happily pointing out a cool, new "bowling" cutie mark. She is bitterly disappointed to find out that both the successful strike and the new cutie mark belong to another filly a few lanes over. Her own ball just manages to reach far enough to nudge the first pin.

Although this technically makes her the best bowler out of the three, it sends her into a funk that nothing seems able to lift... not a cake from the Cakes, nor a hat from Rarity, nor a party from Pinkie. Still disconsolate, AB splits from the others and heads into the Everfree Forest. A trip over a root causes her to fall down and break one of her front teeth. 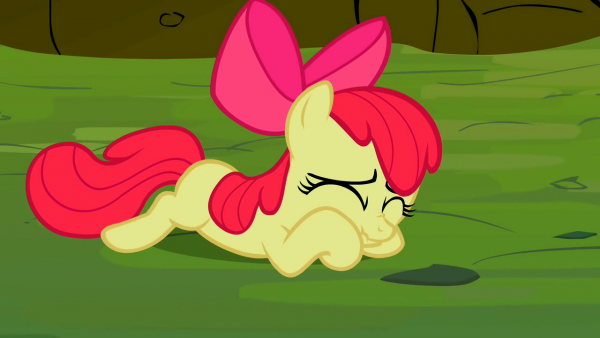 Luckily, Zecora soon finds her and takes her back to her hut. She even mixes up a potion to mend AB's dental disaster. Realizing that Zecora has a potion, brew or tincture for any occasion, she suggests that Zecora might be able to mix a potion that reveals her cutie mark. Zecora denies this as a possibility and continues to mix up another potion to help a rooster who has lost his ability to crow. She shows AB one of the ingredients: "heart's desire", a flower that can be used to fix any problem. When Zecora has to leave to find a missing ingredient, she leaves behind AB... who begins to scheme... 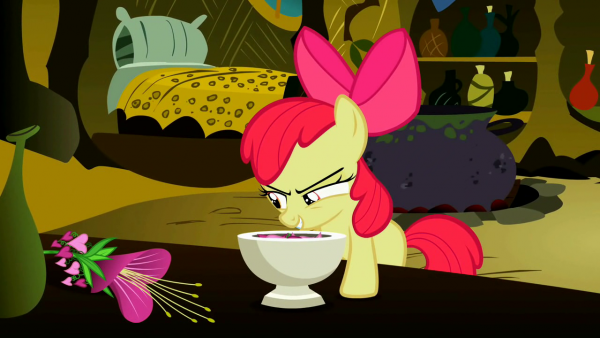 At the school the next day, AB is proud to present her (literally) shiny, new cutie mark, a silver circle. She claims it's something called a Loopdy Hoop (I guess Hula Hoop is a trademarked name) and demonstrates her skills with it. Even Cheerilee is eager to see what tricks she can do. In the middle of her routine, another cutie mark suddenly appears... this one for spinning plates. Since no pony ever has two cutie marks, DT and SS (who else?

) declare they must both be fake somehow. (They're right, as it happens.) When AB is challenged to show she can do this second talent too, she does, eventually involving most of the town in her combination demonstration.

A weary but proud Apple crew return to the farm, and AB says goodnight. Shortly, though, Applejack is awoken by a strange sound coming her her lil' sis's room...not that, actually it's tap-dancing. A third cutie mark has appeared, and AB now not only can tap-dance, she has to... 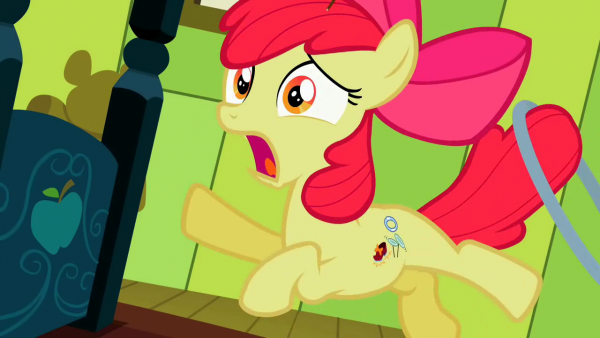 I guess Gloria Estefan was right... the rhythm really IS going to get you...

Applejack takes her to see Twilight, who was just reading about strange diseases. Spike finds her the right book and she reads out information about the Cutie Pox (roll credits!), a mysterious medieval malaise that makes multiple marks and adjudicates arbitrary acting out of the associated abilities. Worst of all, there is no cure listed...

Hoping that Zecora might know of a cure, they try to head through town to her hut, but are slowed by Ab's involuntary talenting (I know that's not a real word, just go with it) including chess, window washing and lion taming. The townsponies panic and run when Spike lets slip that AB has the Cutie Pox. This gives Zecora, who has just arrived in town, the impression that the ponies are still afraid of her. After the misunderstanding is solved, Zecora reveals that she does indeed have a Cutie Pox cure... the seeds of truth, a plant that will only grow and flower when true words are spoken. She also makes it clear she knows that AB went behind her back and used up the last of her heart's desire. Pinkie tries to confess to eating more corncakes than she was allowed, but as high as she goes, it seems she's hedging, eventually begging for it to stop. Jeez, guilty conscious, much?

Since there's a dearth of truth from El Pinko, AB finally admits to using up the last of the heart's desire to make a potion to fake her cutie mark, and that she didn't earn them honestly after all. This confession is enough to make the seeds sprout and grow a flower. AB quickly eats it, erasing all her marks and leaving her a Blank Flank once more. She apologizes to SB and Scoots for being dishonest about her cutie mark.

Given the chance to report to Princess Celestia, AB explains that she has learned that she should be patient, and not will resort to dishonest means to get what she wants. She states that she will wait patiently for her cutie mark to appear.... yeah, that lasts about as long as you'd expect... When it's pointed out that AB actually managed to whip up quite a mean potion on her own, the CMC decide to try for their cutie marks in potion making, and head off at a gallop.

Thoughts on the Episode
While the premise for this episode might seem pretty fantastical, there are actually historical precedents, notable various forms of dancing mania, in which people seemed to be compelled to dance, even to the point of exhaustion, heart failure and death. I don't think it's a coincidence that the first uncontrollable action affecting Apple Bloom was a kind of dancing, nor that the Cutie Pox itself was last seen in Equestria many hundreds of year ago, mirroring the fact that such events were recorded in the 1500s. There's too much correlation for coincidence, and I do like it when we can see that the writers have done their research.

The opening bowling scene was rife with Big Lebowski references. I see a little bit of parental appeal creeping in there. It's always fun to see ponified versions of characters from various movies. But, like, that's just my opinion, man.

Continuing the theme of patience being a virtue, as most CMC episodes do, here again we see that AB's attempt at using the heart's desire to get what her heart desires backfires spectacularly. That magic is unable to make a cutie mark manifest before its time is also made apparent. Since the heart's desire seems to grant low level wishes, it "did its best" to give AB what she wanted, but since her actual mark appearing was literally impossible, what the heart's desire ended up doing was making something possible (if highly unlikely) happen instead... such as a sudden outbreak of a disease once thought gone for good. Similar to the dancing mania, this is a reference to something that does happen in real life, where diseases thought cured return to bedevil us as a species.

As for things to mark the episode down on, there really aren't too many. Some fans were a bit offended by Applejack's comment about Zecora having a "zebra sense", which was perceived as AJ being a wee mite racist. Although Zecora always has had shades of the Magical Negro trope, that it was "Deep South" Applejack making the comment might come off as hitting is little close to home, and this could be considered carelessness on the part of the writers.

There are also a few too many coincidences. That Zecora just happened to be making a potion with heart's desire, and that she just happened to have the cure for the Cutie Pox when she came to Ponyville to find a replacement for what AB had used up, and that the cure just happened to require a truthful confession in order for AB to learn her lesson... it all adds up to being a little too convenient. Almost as if Zecora planned it all along... hmmm... that bears looking into...

But these issues are relatively minor, and could be considered nitpicks (where not outright paranoia...

) Overall, this episode is pretty enjoyable, and despite the ending subverting the moral, the moral itself is a pretty good one. This is not quite an indispensable episode, and it doesn't really gain anything on a second viewing, but there are no major defects in it.

Highlights/Quotes
The scene with a certain pink party pony confessing to conspicuous corncake consumption was pretty amusing, and totally in character for the somewhat gluttonous Pinkie Pie.

Ponies in hazmat suits. That is all.

Pros: Some real life research went into this. Some references for the adults in the audience. Good humour. A worthwhile moral.
Cons: Possible unfortunate implications about "zebra sense". Some convenient coincidences for the plot to work.

Stay sunny side up, everybody!