Note: Credit to @Truffles and @Justin_Case001 for my review.

Am I interested in talking about this episode? No.

For Season 8, Nicole Dubuc brought in a few writers: Brian Hohlfeld, Kaita Mpambara, and Kim Beyer-Johnson. Minus Kaita, each of them have strong connections with Dubuc and worked with her on Transformers: Rescue Bots. Gregory Bonsingore is no exception. But for him, he's a little different compared to the rest. Bonsignore is an award-winning playwright and lyricist: His Off-Broadway play "Gorgonzola: A Cautionary Sicilian Tale" won several awards at a Miami musical festival, including Best Musical and Best Music/Lyrics. So to have an accomplished writer on FIM is a treat regardless of outcome.

In his Friendship Is Magic debut, he displays his credentials.

This episode covers a lot of information, comparable to Lost Mark or even MMC. But what he does so well is manage it. How? When scenes weren't as important (i.e., the Map calling), little time's used, but when he needs to delve into the important plot points (i.e., communicating with the kirin, finding Autumn, figuring out what caused the vow of silence), he takes advantage. Therefore, despite an abrupt ending, the story flows well. It goes by fast without rushing through.

As what Twilight said, this is the first time a set of ponies took part in a second quest, this being AJ and FS. And here, each of them were tremendous. Was Fluttershy scared? Thanks to its ominous name and craggy exterior, more than plausible. The Friendship Express quickly hightailing from its weathered station further and freaky clerk support her fear. But as the episode progressed, her fear starts to ease, starting with helping nearby squirrels gather up bright yellow-to-blue flowers, who in return helped her locate the Peaks's real entrance and their discovery of the kirin. 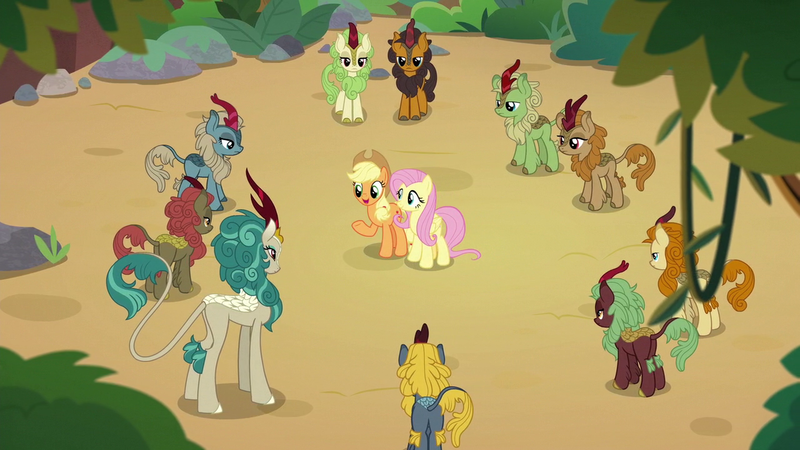 Needless to say, the kirin are gorgeous! Their earthly tones complement really well with their environment and contrast really nicely to the pastel-ly look of AJ and FS. Their manes, horns, toes, tails, and dragon-scale-esque backs are wonderfully designed, with only their brilliant eyes to pop out. And, yes, @Justin_Case001 is right. The tilting of the head makes them look really cute!

But the outsider of the clan, Autumn Blaze, is easily the star of the show and takes up the bulk of the run time compared to the others. Pinkie and Silverstream are massive chatterboxes, but Autumn gives them a massive run for their money. She talks a lot and is full of quirks with solid reason. Other than the view and makeshift toys, she hasn't talked to anyone in ages to the point of forgetting or mispronouncing words. AJ is her first companion since Rain Shine exiled her. And her rapid, sometimes flowery, talk is completely hilarious. Her personality is more than charming. It's warm, bright, and optimistic. Even when she's bored, she finds ways to remain eccentric and hopeful to reunite with her clan, evident in many ways, including her gossip with a stick.

Oh, and We're Friendship-Bound? You're dethroned! A Kirin Tale is the best song of the season. Nuff said!

Not enough? Well, alright. The events Blaze described are quite serious, but because she and the song sound so happy with a boatload of humor (including pop culture jokes referencing Citizen Kane, Hamilton, and especially Phantom of the Opera!), the tone's nowhere nearly that dark. The song itself, written by Big Jim and Dubuc, is really funny with many fantastic lyrics. The kirin society's closed off from outside contact and, if going by the ancient shield Rockhoof used, lived closed off for millennia. Its vow of silence is relatively new in their history, but painted on a nearby rock (and shown to FS offscreen) to remind them of why they accepted this vow. 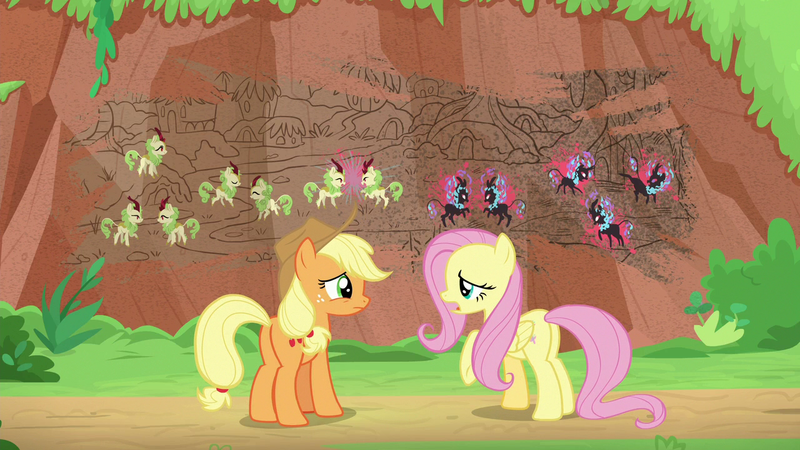 The graphic imagery in itself paints a really dark era of what happened and, to echo what @Truffles stated in his replies, why Rain Shine (the kirin's longtime empress) was completely justified to take such a drastic measure in the first place. The kirin clan devolved into a literal flame war over who'll buy a homemade water pitcher, and their nirik fight destroyed their water supply, flora, and village. But even after becoming homeless, they kept going, and some of them were completely incapable of controlling their temper, hence their sustained nirik form. Had Rain Shine not step in and order everyone to step into the Stream of Silence and suppress their feelings, they'd lose more than just their village, but way of life or even themselves. And in response to those who criticize Rain Shine's plan as flawed, that's the point. Anger's normal, and it's okay to express your anger. But it's important to channel it responsibly. Rain Shine's solution restored order and peace within the Peaks of Peril, but sacrificed being able to communicate and feel without being reminded of why they suppressed their emotions. The following lyrics metaphorize the very moral:

And that was why the Map called AJ and FS: to teach them how to constructively moderate their anger and disagree without sacrificing their joy, ability to feel, or fearing to hurt each other's feelings and reunite Autumn with the others.

Why Applejack and Fluttershy in particular? For a few reasons.

And @Justin_Case001 makes three great points in his review.

Other than the pacing, cramming of detail, and AJ getting briefly nailed with the stupid stick, its last flaw is how obvious the Foal's Breath flower's impact into solving the friendship problem becomes as the plot progresses. Fluttershy and the story spent a good amount of time arranging it for the squirrels, and its brilliant gradients of blue to yellow with all that detail stand out really strongly against the dirty-looking desert. The fact that Blaze landed in a bed of identical flowers and made a tea out of them connects the dots much more.

Yet, they're all very minuscule in the thick of things. Bonsignore's scripting talents really shine with well-done dialogue, pleasant characterization of AJ, FS, and Autumn Blaze, and intelligently simple story. Despite its fast pacing, the script is tight and polished; everything logically flows from one point to another without anything out of place. Since S4, FIM plugs in one episode featuring at least one celebrity guest: Weird Al for Pinkie Pride, Lena Hall for Mane Attraction, Patton Oswalt for Stranger Than Fan Fiction, Felicia Day & William Shatner for The Perfect Pear, and now Rachel Bloom (Autumn's VA) for this one. DHX, now Allspark Studios, puts forth a ton of effort into making the guests belong into the story, and that hard work pays off into an excellent episode (with TPP museum-worthy). Sounds of Silence is no exception. In an already-phenomenal Season 8, this is another addition to the pile of outstanding episodes.