A super-duper party pony: that pony is meeeee! - Cheese Sandwich

Following on in the same vein as Rarity Takes Manehatten and Rainbow Falls, this episode continues the Mystery Box and Key arc, and as the title indicates, this time it’s Pinkie Pie’s turn to learn that her friends are more important than being known as the best party planner. Again, I don’t see it as “relearning” their Element, but as realizing that their friendship should be the most important thing in their life.

The opening scene returns us to Appaloosa, where we see a party of both ponies and buffalos is in progress. The one responsible makes his appearance… Cheese Sandwich, voiced by well-known parody musician Weird Al Yankovich. His “Cheese Sense” tingles, letting him know that his next destination is Ponyville. He sets off with his rubber chicken companion, Boneless. 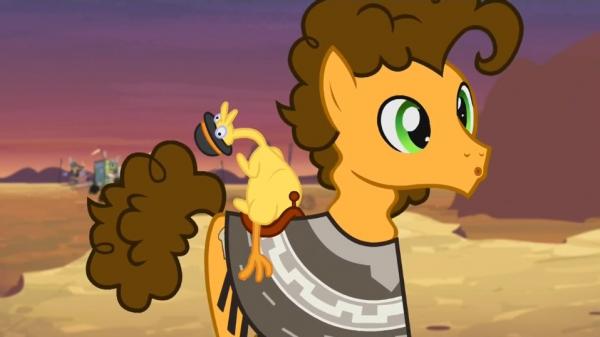 So throwing parties all the time will give you the equivalent of Spider Sense?

Meanwhile, in Ponyville, Pinkie is planning a birth-iversary (combining a birthday and the anniversary of moving from Cloudsdale to Ponyville) for Rainbow Dash. Rarity again comes up with the name – like she did with Flutterbat, although this time the word is slightly more imaginative. 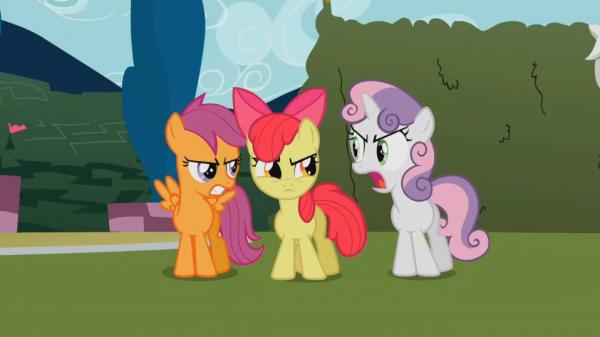 Sweetie Belle: That’s not a word!
Scootaloo: What are you, a dictionary?

Cheese arrives, and Pinkie is at first delighted to meet another party pony. However, he turns out to be too good at throwing parties, leaving Pinkie overshadowed. She decides to give up being the town’s soiree engineer, and goes home to mope. However, seeing pictures of all the parties she’s thrown in the past (and a few well-placed rainbows) she gets her mojo back!

Confronting Cheese, she challenges him to a goof-off (which it would be more accurate to call a polka battle) at high noon… or since it’s already 3 in the afternoon, at 3:10, so that Rainbow Dash can judge between them and choose the best party planner. Their musical (and nonsensical) contest escalates to the point where it actually starts to annoy Dash and ruin her birth-iversary. Pinkie realizes this as the now-familiar rainbow flashes in her eyes. She brings the goof-off to a halt, conceding the right to plan the party to Cheese, so as to prevent making Rainbow any more unhappy.

Things start looking up when Rainbow comforts Pinkie, saying that although the town got carried away with Cheese Sandwich, she’ll always be the resident party planner. Cheese Sandwich also arrives, to tell everypony a story about how he became the life of the party. In a flashback, we see Cheese as a shy colt, who is inspired by a very special young filly throwing a party. That filly is of course, none other than Pinkie Pie! He then gives her his friend Boneless, (complete with rainbow shimmer) to show his esteem, before leaving on his never-ending quest to spread the joy of celebration. Luckily, he has another friend, Boneless II, to keep him company.

So… many… songs! And I though Magical Mystery Cure was jam-packed with music. Of course, having Pinkie the character in the spotlight and Weird Al as a guest voice star, it was pretty much inevitable. Plenty of polka to go around. The highlight of the songs for me was the appearance by Diamond Tiara, who is grudgingly forced to admit that Pinkie did a good job of planning her Cuteceanera, which is rather a first for the character. I’m still hoping she gets a focus episode at some point.

The focus of the episode, of course, is the pattern of the spotlight character be faced with a dilemma, be reminded that their friends are more important than the problem before them, and have a rainbow realization or a prismatic epiphany, if you will, lead them back to the right path. That being so, it wouldn’t be fair to point out the predictability as a flaw for this episode.

Weird Al is great as Cheese Sandwich. As I referenced earlier, it’s slightly odd that he also has a variation of Pinkie Sense, although perhaps he somehow caught it from her when he was a colt. It would be rather ironic if the rubber chicken was the actual carrier of the Sense from Pinkie to Cheese, since we see that it was originally Pinkie’s rubber chicken that he picked up.

Derpy is somewhat prominently placed in this episode. It seems that they’re going out of their way to include her, which her fans must be very happy about.

The banner of Rainbow Dash features a drawing of her that looks extremely accurate, but it turns out, it actually is Dash, and the picture drawn on it is revealed to be rather different, and much less skillful.

Diamond Tiara talks about Pinkie throwing her party for her, and the interactions between her and Silver Spoon during the song are quite amusing.

Cheese uses some of Pinkie’s lyrics from the “Smile” song, and then flat out denies it when she calls him on it. Of course, Weird Al is well known for polka compilations of other musicians’ works.