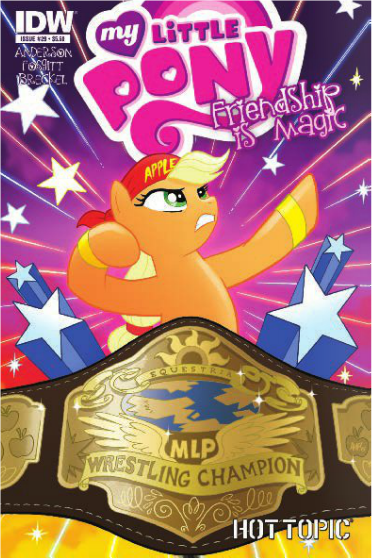 It's pretty much a comin these days in the EWF (Equestrian Wrestling Federation,) you have alot of underrated talents in the roster that alot of people would like to see succeed, but they are constantly shunned away into the midcard and ponies like Twilight Sparkle, Sunset Shimmer, Trixie, etc. pretty much decide the world title for themselves every PPV.

But it seems like a Southern Pony by the name of Applejack, who has been constantly kept down in the midcard now gets her chance this sunday, at the biggest show, Equestriamania. Applejack is somebody who everybody can relate to. She comes from a family of farmers, never got anything handed to her and had to work hard everyday. While the opponents in the Main Events, the champion Twilight Sparkle and this years winner of the Canterlot Rumble, Rainbow Dash, are already big stars.

It was originally planned to do a match between Twilight and Rainbow, which many people just saw as a tool, for Rainbow to promote her Wonderbolts career, since she is just a part timer these days. The crowd pretty much shat all over the current Main Event plans and wanted to see Applejack. But now it seems like, that they actually get what they want.

But to get into the Main Event, she has to fight Celestia in the opening bout of Equestriamania. If she wins, she gets in the Main Event. If she dosen't, Celestia buried another Talent.

I can tell you already, this will be one hell of a show.