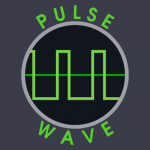 By Pulse Wave,
April 7 in Pony.fm