What Nightmare Moon ACTUALLY did to Equestria? (except for what she did to only Celestia) 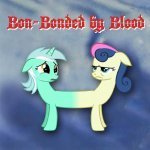