What's the story behind your oc/avatar? 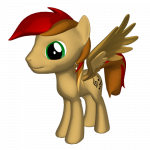